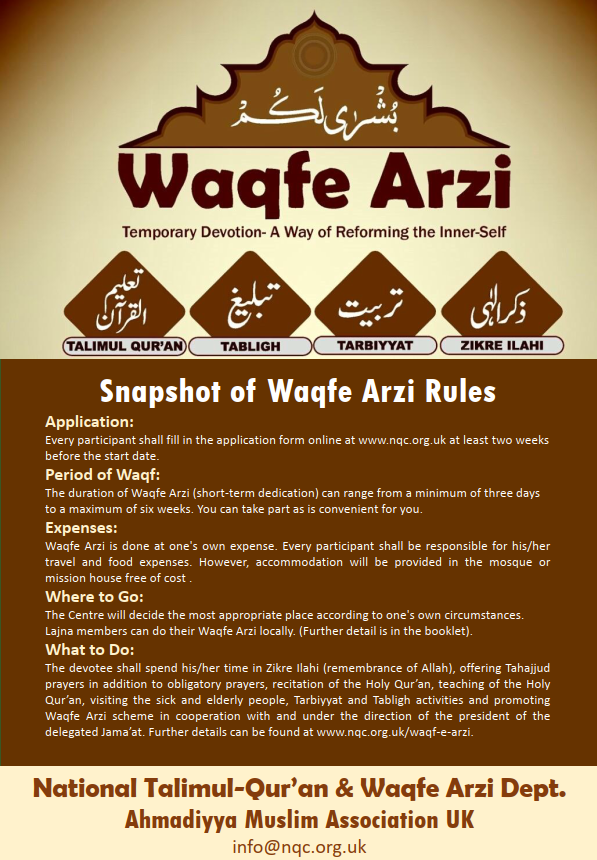 The devotee shall spend his/her time in:

On March 12th, 1966 Hadhrat Khalifatul Masih III introduced the Waqfe Arzi scheme. The purpose of this project is to promote the learning and teaching of the Holy Quran as well as imparting religious knowledge to local members. Under Waqfe Arzi , at their own expense, thousands of Ahmadis are teaching Qur’an to the members, exhorting them to do good deeds and shun evil. The net result of this activity is that members of the Community are receiving religious education and moral training, which in turn is strengthening their character. The minimum period required for Short Term Dedication is two weeks at a designated place.

Essentially, The Waqfe Arzi department aims to prepare such members of the Ahmadiyya Community who are sincere, knowledgeable, and healthy for temporary dedication and to dispatch them to various destinations, especially to places where there is a need for the learning of the Holy Quran. Apart from this, the responsibility of focusing on the general teaching and moral training of people especially those who have newly converted. However much possible they should try to teach the Holy Qur’an, it’s translation, and the meanings of the verities of the Quran.

When this scheme was first launched, many members of the community readily answered the call of the Khalifa of the time by saying “Labayk” (we are here) and put themselves forward for temporary dedication. In reference to why this scheme was started, Hazur says:

“The main purpose of the Waqfe Arzi scheme is that members of the community should at their own expense voluntarily go to various Jama’ats and organise classes for the learning and teaching of the Holy Quran. The local Jama’ats should be so organised that they should willingly and happily take up the yoke of the Holy Quran upon their shoulders and set an example for the world.”

“Waqfe Arzi is a way of reforming the inner self The second biggest benefit of the waqfe Arzi scheme is that those who go on it get to self examine themselves in certain aspects. They become aware of some of their own weaknesses before they leave, and get inclined towards prayers. In other words, a large part of the preparation for going on Waqf is that they get inclined towards praying, and increasing their religious knowledge or efforts at renewing it. They increase their study of books before leaving, and take some books with them. They contemplate, and keep an eye on their negligence, carelessness and weaknesses and try to correct them. They have the desire that when they go to another place, they should set a good example for them, and not be a cause for them losing their faith. Thus, Waqfe Arzi delegations have benefited immensely from their blessings of prayers.”

“Every Ahmadi should perform Waqfe Arzi. It is necessary for Murrabis and office holders in general, in fact it is necessary for every Ahmadi, that he exhort not only his own self, but also his brother that he participate in Waqfe Arzi. There is no doubt that this is one of the paths of sacrifice ,and the way is difficult. But there is also no doubt in this that without treading on the paths of sacrifice we cannot achieve the pleasure of Allah.

A great and majestic glad tiding
Qur’anic blessings will envelope the world.

“I saw in the state of being awake, that just like when there is lightening and it brightens the surroundings from one end to the other, a light appeared and enveloped the world from one extreme to the other. Then I observed one part of this light gather up and turn into words. A majestic sound boomed out in the atmosphere, which appeared to be made from this light, and it was BUSHRA LAKUM…(glad tidings upon you). I was made to understand that the light I saw that day was the light of the Holy Quran which was being spread through the world by the Taleemul Quran and Waqfe Arzi schemes. Allah will bless this enterprise and the blessings of the Quran will envelope the world just as that light was seen to envelope the world. Allah be praised for this.

I. Spend this time of Waqf especially in prayers and remembrance of ALLAH.
II. The Tarbiyyat of the Jama’at to which you been sent is your primary responsibility. Salat in congregation should be established. It is essential that everyone should at least be able to recite the Holy Qur’an. Also pay attention to translation and commentary of the Holy Quran. An enthusiasm should be generated for the study of the Holy Quran among the children, youth and the elderly and indeed among the women as well .
III. Exhort the members to participate in Jama’at activities and in particular the paying of their chanda (financial dues) on time .
IV. If there is some bad feeling or dispute between two Ahmadies, try to clear it up and resolve it with love and affection. However under no circumstances entangle yourself in any local Jama’at dispute (if any)
V. Concentrate on Tarbiyyat and Islaho Irshad (reformation and exhortation)
VI. Try to invigorate the Jama’at in general and to increase interest in Jamaat activities.
VII. Prepare your own food. However in exceptional circumstances you may pay someone to do this for you even if you have your relatives living in the area.
VIII. Try to inform as many people as you can of this blessed scheme of Hadhrat Khalifatul Masih III (may Allah envelope him in His mercy) and invite them to participate in it. Get their forms filled in and send with your report.
IX. Prepare a comprehensive daily/weekly report of your activities and send it with your Report Form .

Any cookies that may not be particularly necessary for the website to function and is used specifically to collect user personal data via analytics, ads, other embedded contents are termed as non-necessary cookies. It is mandatory to procure user consent prior to running these cookies on your website.